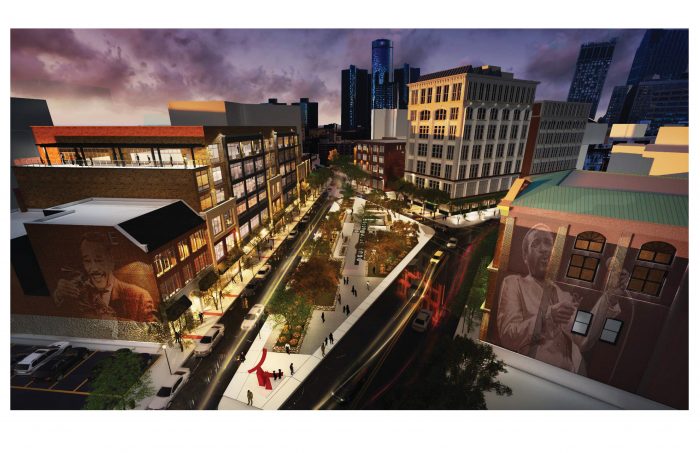 Paradise Valley was a thriving business and entertainment district adjacent a densely-populated African-American residential area in Detroit, known as Black Bottom, from the 1920s to 1950s. Located on the near-east side of downtown, Black Bottom was where a majority of Detroit’s African-American population lived, while Paradise Valley was where many worked and played, with more than 300 black-owned businesses ranging from drugstores and beauty salons, to nightclubs and theaters. However, urban renewal programs and freeway projects of the 1960s led to the demolition of Paradise Valley and Black Bottom, and with it, their immense cultural and historical significance to the city and the African-American community.

As part of this year’s Detroit Month of Design festival, Paradise Valley: Designing a Commemorative Cultural and Entertainment District looks to highlight the past, present, and future of Paradise Valley. Participants will learn about its vibrant history and tragic displacement through visual displays. A guided walking tour will explore the Paradise Valley Cultural and Entertainment District, established south of Ford Field in 2015 to honor and revive lost cultural and economic vitality. The tour, led by Hamilton Anderson Associates in collaboration with the Paradise Valley Conservancy, will discuss on-going infill and rehabilitation projects for the district, as well as master planning and programming efforts underway.

This event will be offered twice during the month of September.
To attend, please register for one of the following dates below.
We look forward to seeing you there!

Please check back for more event details including speakers, tour stops, and more!